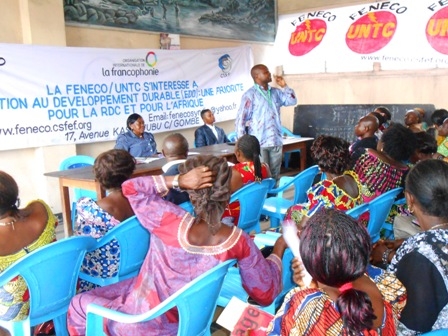 The union’s secretary general Augustin Tumba Nzuji led a workshop on the role of the Mutuelle de l’Enseignement Public (MESP) or State Education Mutual Society, which is the mutual health society for primary, secondary and vocational teachers, and its importance to education professionals and their families.

The MESP was set up at the General Constituent Assembly of 20 February 2010 under the aegis of the Ministry of Education and backed by the Education and Solidarity Network. The purpose of this mutual society is to cover healthcare requirements for education professionals and their families for which there is a limit of three children.

For the DRC, this represents a huge step forward in terms of healthcare. In this country of 75 million inhabitants where 70% of the population lives in poverty, the average teacher’s salary is €60 per month. Its social protection requirements are considerable. On 11 November 2011, the first MESP member received medical care.

Now, although the project is well-established, the MESP is faced with several challenges which it must overcome if it is to continue and develop its activities. Operating in Kinshasa since January 2012 and Katanga since early 2014, the MESP covers only 10% of teachers in the DRC. It is still highly dependent on government subsidies for its funding.

However, things are about to change. Following work carried out with the Network on including Education International member unions (FENECO, CSC, SYECO) in the mutual society’s governing bodies, it is likely that FENECO will be represented at the next general meeting. This inclusion will enable health cover to be extended to more teachers since the union is already making significant efforts to raise awareness among its members.

If this inclusion is confirmed, the Education and Solidarity Network and its members will assist the MESP with its governance (rewording the by-laws and constitution), training its directors and determining how to maintain an economic balance.