From 14 to 16 January 2019, thirty-eight organisations affiliated with Education International (EI) met to share their experiences and think collectively about programmes and policies regarding education union development cooperation. As David Edwards, EI secretary general, said, EI’s strength lies in its ability to foster cooperation between its members in order to realise solidarity of union members and trade union independence throughout the world. 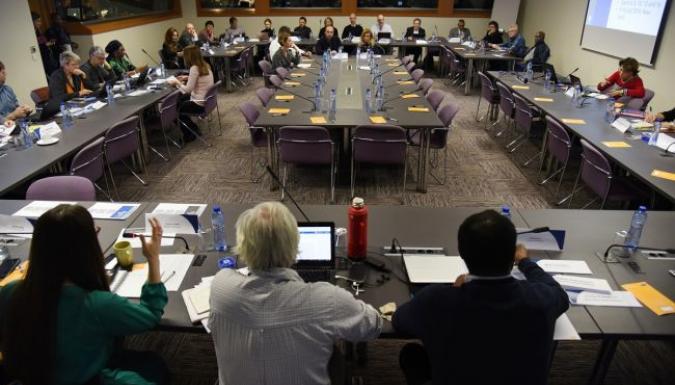 The discussions lasted three days and provided an opportunity for over sixty representatives of education unions in Africa, Europe, America and Asia to share their opinions and discuss the challenges of international cooperation between unions. If bilateral cooperation was once the dominant platform, it now seems that regional cooperation and the consortium are preferred.

EI and its members are aware that they must first address the needs articulated by the unions themselves in order to make the development cooperation programmes more effective. EI has presented the results of a survey of 70 of its members to find out the unions’ priorities. Accordingly, the major issues facing unions and which are the subject of cooperation projects are: the increasing number of unions, training and capacity building, social dialogue and renewal.

As capitalising on experiences was one of the objectives of this meeting, certain unions were led to share their experiences. That is why the Canadian’s Teachers Federation presented the voluntary programme “Project Overseas” who, since 1962, have allowed Canadian teachers to train other teachers in the Caribbean, Africa and Asia during the summer holidays.

The objectives of EI programmes are to build strong, dynamic and autonomous unions to realise quality education for everyone. These objectives will only be achieved through the promotion of union unity and the introduction of an open dialogue within and between unions, including a democratic space for youths and women (70-80% of union members are men, even though the majority of education professionals are female).

In July 2019, the 8th EI World Congress will take place. Its principal theme, “Educators and their Unions Taking the Lead” will be divided into several discussion topics: promoting democracy, human rights and union rights; developing the profession; ensuring free, quality education for all. Several caucuses will be organised in order to showcase diversity within the education sector: women, LGBTI, indigenous peoples, researchers, young people, etc.

Reviewing projects in the French-Speaking World