In the framework of the SACHA project, Jean-Ricard Florestal, student-intern, carried out a mission in Brussels and Paris to report on the progress of its activities and participate in several events and meetings. At the MGEN headquarters, Educational International’s offices, at Solidaris or at the Forum of Wallonia-Brussels Council for the International Cooperation, he presented the difficulties encountered in the planning of activities and highlighted the project’s successes and latest advances.

In the framework of the SACHA project, Jean-Ricard Florestal, student-intern, carried out a mission in Brussels and Paris to report on the progress of its activities and participate in several events and meetings. At the MGEN headquarters, Educational International’s offices, at Solidaris or at the Forum of Wallonia-Brussels Council for the International Cooperation, he presented the difficulties encountered in the planning of activities and highlighted the project’s successes and latest advances.

Haiti is still in the midst of a political, economic and social crisis of great violence; with an upsurge in the last few months of robberies, attacks and kidnappings perpetrated by armed gangs. Despite this insecurity, many schools have reopened their doors. In this context, several Committees for Education on Health, Citizenship and Social Protection of the SACHA project have resumed their activities, by organising events on sanitation, hygiene and COVID-19, among others.

Given the lack of means and inaction of public authorities, educational bodies’ mobilisation is more essential than ever to ensure a quality health education for young people, and the activities developed by the SACHA project committees are the perfect example.

As a student-intern, Jean-Ricard Florestal provides support to the SACHA project’s management, while carrying out an action research under the supervision of Professor Obrillant Damus with a goal of modeling the project and being able to export it to other institutions in Haiti and elsewhere.

During his week-long mission in Paris and Brussels, he took part in several events and meetings to present the objectives and news of the SACHA project to different organisations of the Social and Solidarity Economy. A busy programme that also enabled him – as part of his research – to learn about systems, problematics and initiatives developed by ESN’s partners (in Europe and elsewhere) around the issues of social protection and health education. The meetings’ programme is detailed below. 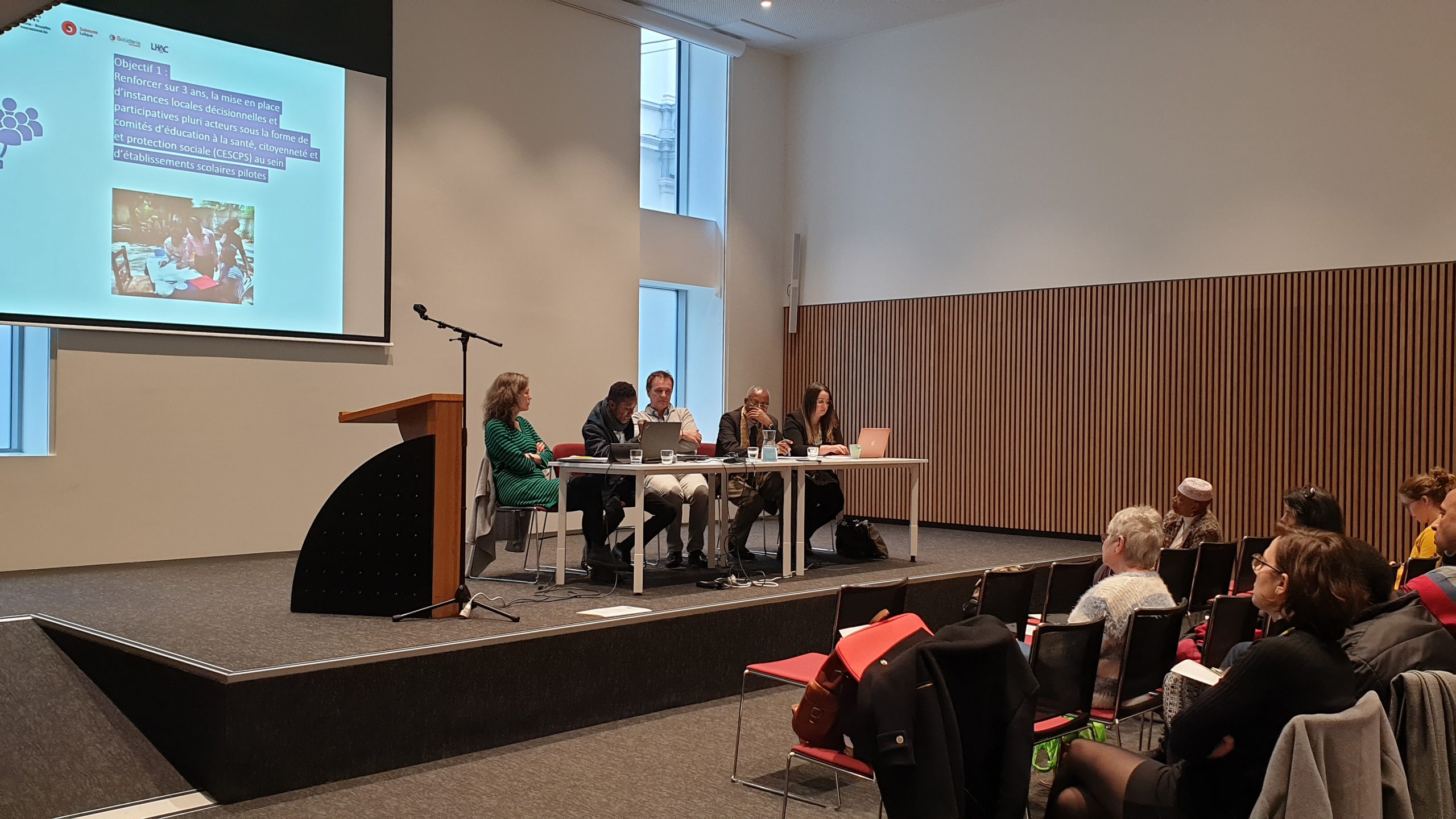 Participation in the ESN Day on Social Protection Education – Paris

ESN brought together its members and partners for a day of collaboration around the theme of “youth engagement for social protection”. The aim of the day was to present the organisations and their tools related to the creation of a culture of social protection, especially among young people.

To the organisations present, and with an illustrative video, Jean-Ricard Florestal presented the SACHA project, its objectives and highlighted its successes owing to the involvement of committee members. He indicated, however, that social and political tensions in Haiti have compelled the committees to temporarily suspend their activities until the situation gets better.

Jean-Ricard was received at EI headquarters by Florian Lascroux, coordinator in the Solidarity and Development Unit for an encounter and discussion meeting. After presenting him the projects supported by EI around the world, Florian Lascroux focused on EI’s programmes in Haiti. The two discussed the political, social and economic crisis in the country, a context that is having an impact on the EI and its affiliates’ projects as well as on the SACHA project.

A focus on the privatisation of education in Haiti and the problems it raises was made in order to underline the importance of teachers’ unionisation, especially for those in the private sector, who are too often deprived of their rights because of the lack of legal framework in the sector.

Florian Lascroux stressed the importance of unity in the unions’ advocacy actions, concluding that a collective action would be more influential with the public authorities and thus have more impact for teachers. 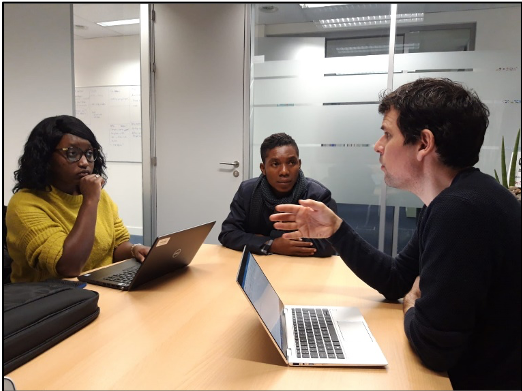 At the invitation of the Solidaris mutual, Jean-Ricard Florestal and ESN attended a conference co-organised with the Mutualité Chrétienne on Belgium’s social security system, including the running of the health insurance system, which is co-managed by the State and the mutuals.

Co-management by mutuals, which are platforms for citizen participation, facilitates transparency, the responsibility of stakeholders and the protection of rights.

The importance of developing effective social security mechanisms was emphasized by Jean-Ricard Florestal, who explained that in Haiti there are only private insurance companies except for the National Pensions Office (ONA) and the Occupational Accidents, Sickness and Maternity Insurance Office (OFATMA). While contributions are directly deducted from civil servants’ salaries, beneficiaries receive little to no benefits. He pointed out that collective solidarity actions for access to health care are limited, and mainly occur in rural areas.

At Wallonia-Brussels International, the agency in charge of international relations for Wallonia-Brussels and sponsor of the SACHA project, Jean-Ricard Florestal, Louise Magnard (ESN) and Hawa Fatty (ESN) presented the latest progress of the project to Mr Fabrice Sprimont and Mrs Caroline Vandenwouwer.

Jean-Ricard explained that the activities of the operating committees include training students in multiple sessions to provide them with better practices to clean up their facilities and thus ensure better learning. He reported that obstacles caused by instability and insecurity have forced the other committees to suspend their activities until the situation improves. Although CEMEA-Haiti is unable to visit them, they maintain regular contact with these committees.

In line with the stakeholders’ recommendations, ESN will postpone its missions to Port-au-Prince planned in the first semester of 2020 to a later date.

Opening of the Social and Solidarity Economy and Decent Work rountable, Alain Coheur pointed out that SSE holds a special place in the dynamics of sustainable development, especially since it “offers citizens the opportunity to get involved, by reconciling collective and individual interests, [and that it also constitutes] a space for democracy and debate“. During the round table, Jean-Ricard Florestal introduced the participants to the SACHA projects in Haiti and explained the importance of educational communities and unions in the fight for the promotion of health, well-being and good working conditions.

He highlighted the project committees members’ dedication and their work in health education with their students. After presenting some of their achievements, he expressed the fact that despite the setbacks and obstacles imposed by the current socio-political climate, the project participants are showing resilience and commitment to make every effort to ensure its continuity. 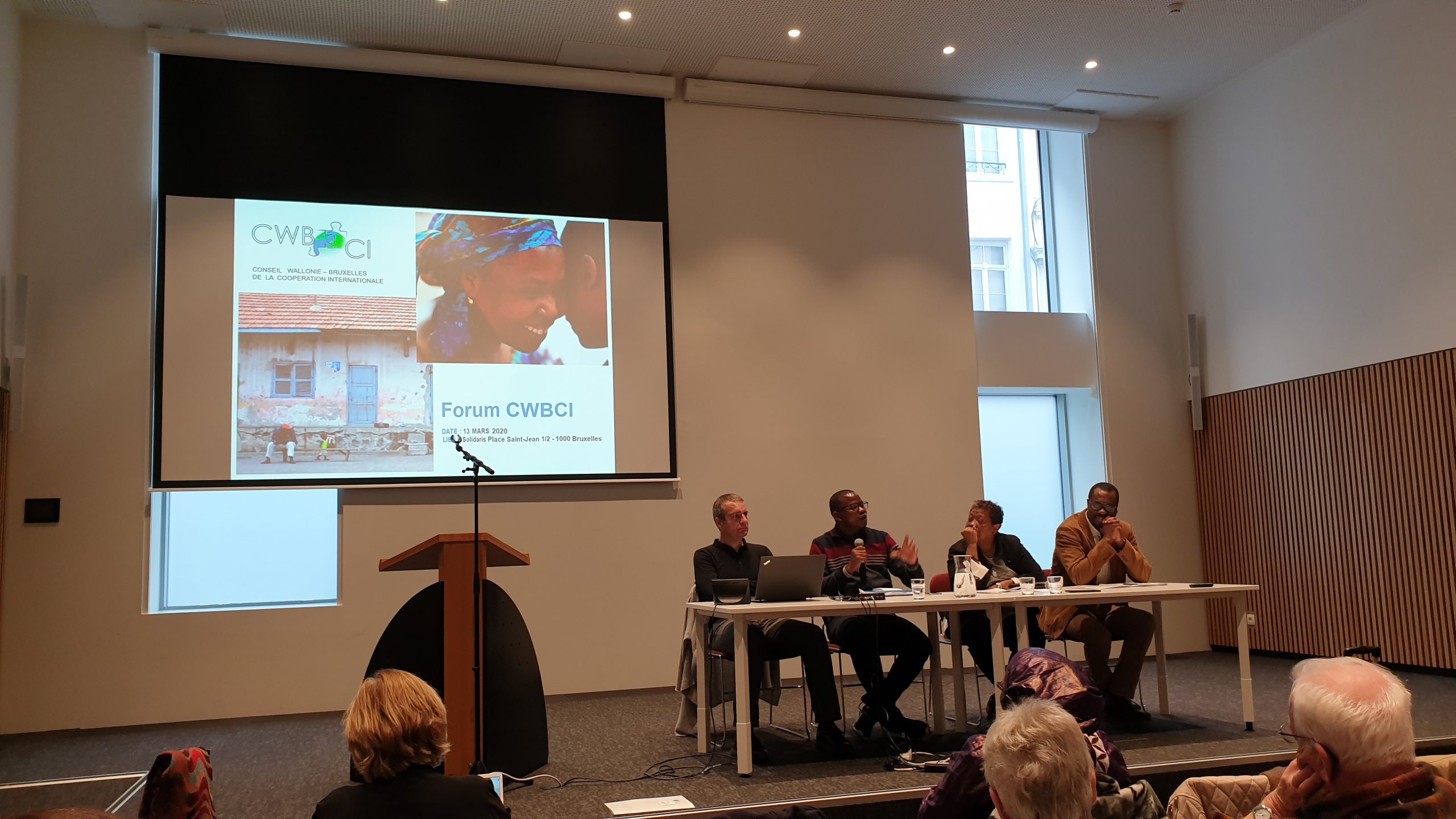