8TH GLOBAL CONGRESS OF EDUCATION INTERNATIONAL: EDUCATORS AND THEIR UNIONS TAKE THE LEAD

NTIC, rights of migrant children and defence of the profession

The delegations defended resolutions aiming to support high-quality early years education, information and communication technologies, education in global citizenship, as well as those related tounion renewal, the rights of women and girls, and the rights of LGBTI people.

The members of the Education and Solidarity network the congress adopted a flagship resolution on the mental health of teachers and education support staff.

The Congress also committed to defending the rights of migrant children and young people to access education and adopted a resolution condemning President Donald Trump, as well as a resolution aiming to combat attacks on schools in Africa, and the systematic erosion ofpublic education In Brazil.

Climate change also features prominently on the agenda of the 8th world congress of EI. Furthermore, EI published a new informative guide on the topic to help teachers to tackle this topic in class and beyond this.

The Congress elected the new Executive Board : in the management of the organisation, 15 women and 12 men will be responsible for controlling and implementing the policies and activities of the EI.  The Executive Board holds at least one meeting per year to supervise the application of the decisions taken by the Congress. The next Executive Board of the IE will be held in Brussels in November.

“As the new Secretary General of Education International, I am optimistic because solidarity is the lifeblood of our organisation. I am convinced that we are more than the sum of our parts. We gather to reaffirm our principles and to establish a common path which is adapted to these uncertain times” David Edwards, Secretary General of the IE, declared in “ Notre Mandat “ (Our Mandate). 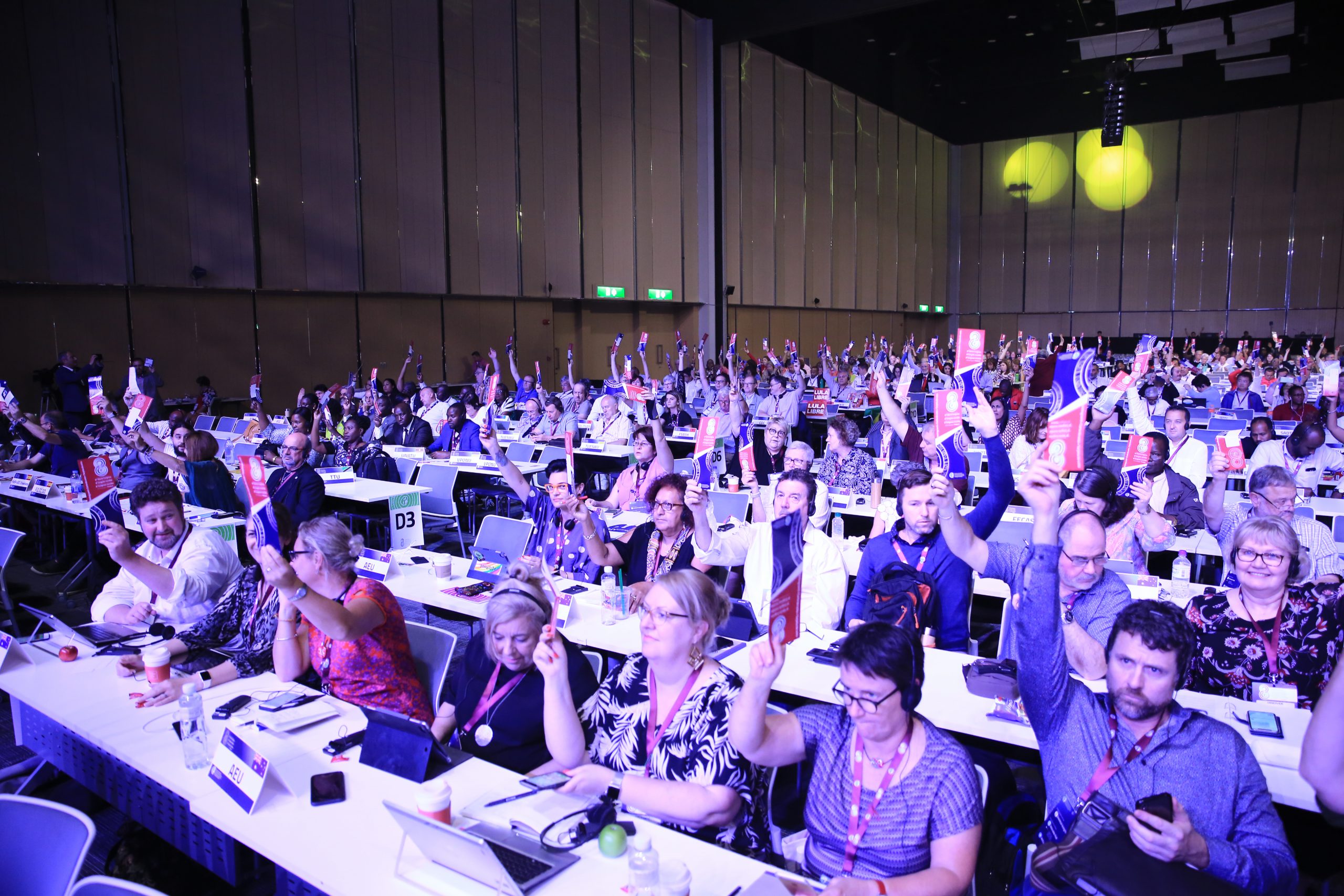 The 8th world congress of EI hosted its first round table of young delegates. With a clear-cut age limit of 35, participants met to develop strategies aiming to accelerate union renewal.  “Alone, neither an educator nor a trade unionist can change the world. However, we should never under-estimate our contributions and our impact. We are present in each community. We are still widely respected. We work with the future each day: our youth, David Edwards highlighted in “Notre mandat” (Our Mandate).

In her closing speech, the President of EI Susan Hopgood thanked participants for the confidence they had placed in her for her role as manager of the organisation and invited them to take the lead to specify the new EI policies in their countries.  “We cannot put an end to the threats that endanger our planet, human rights, democracy, quality free public education and our profession, without reaching out to each other, without consolidating our base and without becoming more powerful. We need to organise, organise, organise. We need to fight and will need to fight. ” declared Susan Hopgood. 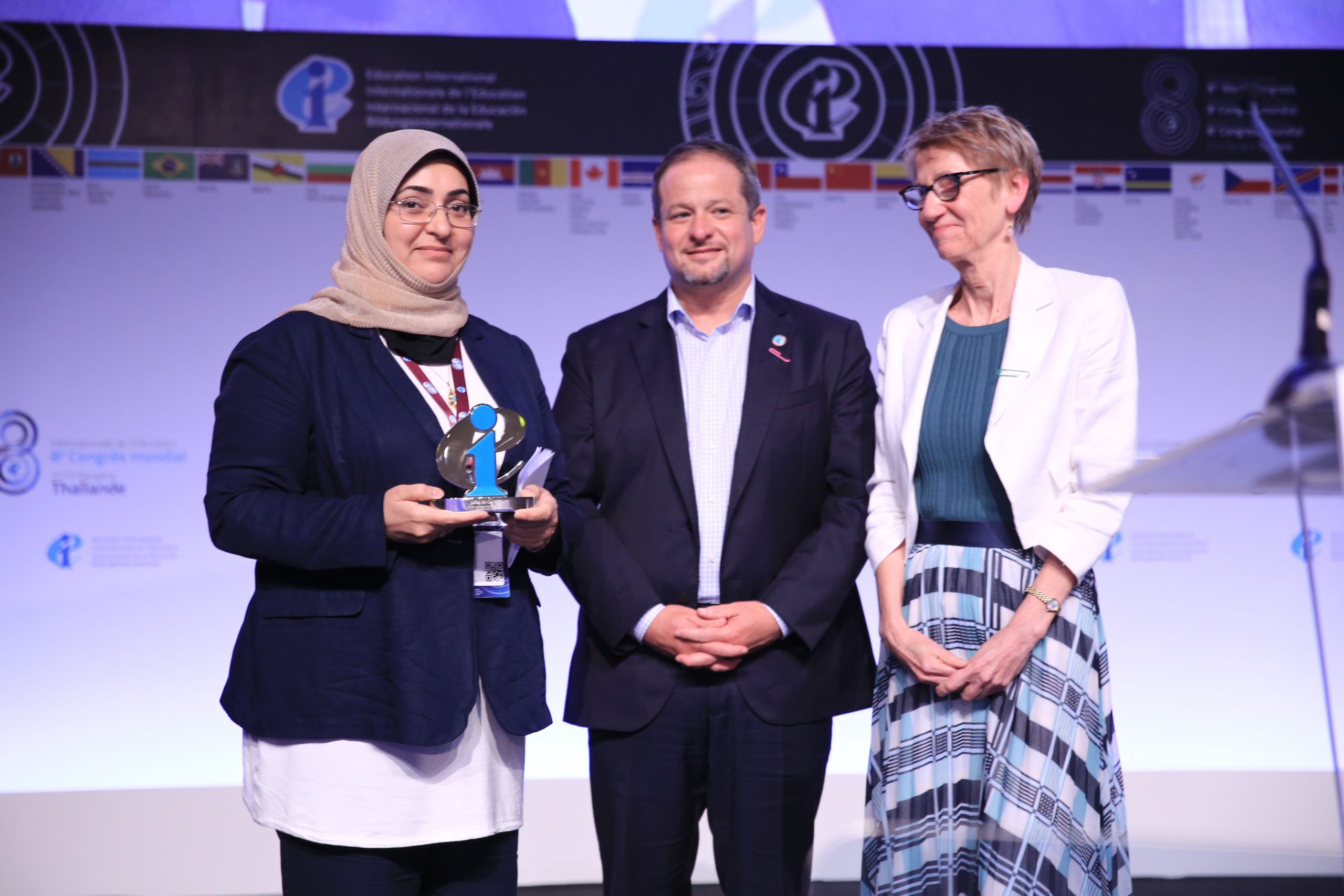 The Education and Solidarity Network at the congress

The Education and Solidarity Network, of which Education International is a founding organisation, held its General Assembly on the fringe of the congress, on 20 July in Bangkok.

The RES was also active at the congress on Monday 22 July, hosting a conference called EdTalk on health at work. Romain Chave and Louise Magnard presented the issues from the health at work surveys of education professionals led by the RES. Sofia El Yousfi, General Delegate  of Adosen, a new member of the network, presented the physical, mental and social health diagnosis tool for pupils: “Filgood”. 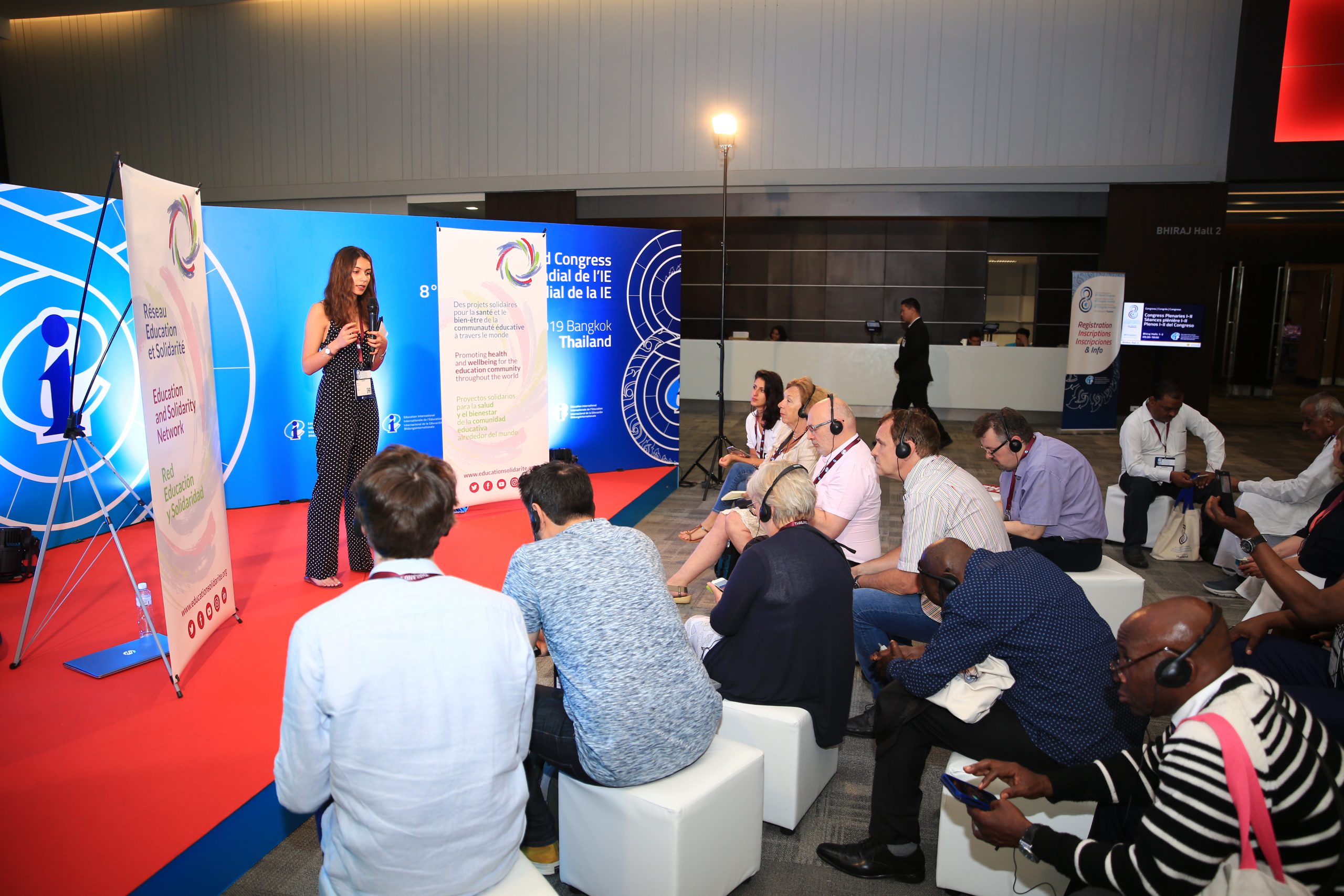